All fun and ‘Games’ 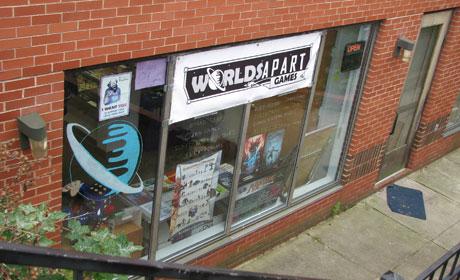 Danielle Augeri/Collegian
Gamers in the Pioneer Valley looking for a laid-back community to play games, meet new people, or just get work done, need to look no further than Worlds Apart Games in Amherst.
Worlds Apart is a non-profit game store offering a variety of card, board and role-playing games (RPGs) as well as used books and comics to anyone interested. The store was founded by University of Massachusetts graduate and entrepreneur Michael Whitehouse.
Whitehouse started his entrepreneurship into the gaming world in January of 2002, when he opened his first store, Phoenix Games, in Sunderland. The concept of the original store was a place where gamers could just hang out and play games. The only difference was that Phoenix Games was aimed toward making a profit.
“After about two years it was pretty clear that it wasn’t going to make money,” said Whitehouse. “But it developed this great community, so I decided to stick with it.”
The store became a place where many gamers would come in frequently, in some cases even daily. The community carries a nonchalance that makes all gamers feel welcome to be themselves and stay as long as they want.
“If you [walk in] here, you know you’re going to find people you know, or people you would like to know,” Whitehouse said.
“This community is a safe place to go to where people won’t judge you,” said UMass senior Nikki Gamache, a frequent patron of Worlds Apart.
She commented that the store’s community is “a lot more open-minded and caters to a larger variety of people,” than most game stores.
“All my friends are here,” said Worlds Apart volunteer Zach Dunehew. He also noted the sense of community he gets from working at the store.
“It’s less of your stereotypical game store,” said Alex Bernsten, also a member of the store’s volunteer staff.
In December of 2007, it became clear that Phoenix Games wasn’t worth keeping open. Whitehouse decided that instead of declaring bankruptcy, he should put his resources to use to serve the Pioneer Valley Gaming Collective.
“I realized I had an entire game store’s worth of equipment and merchandise, it was just in the wrong place with the wrong organizational structure,” he said.
Shortly after Christmas, Whitehouse announced his plans of changing the angle of the gaming establishment. In the five weeks following, the staff wrote new by-laws for a cooperative and started gathering and selling membership for Worlds Apart Games. The money raised from selling memberships, plus some negotiating with a generous landlord, got the business off the ground.
The store is run by an executive board made up of General Manager Whitehouse, Quartermaster Dan Stubbs, Treasurer Lee Steventon, and Membership Coordinator Kiernan Gulick-Sherrill. The board is also advised by a council of five additional co-op members.
The co-op began to make a profit as early as July, just five months after the store opened. Treasurer Lee Steventon attributes the business boom to the support of the community established by Phoenix Games.
“A lot of the people that used to go to Phoenix Games completely jumped on board with us from day one,” she said.
Whitehouse said the two key factors that helped the growth of business were location and word of mouth from a “collective structure.”
“Just [the difference between] moving from Sunderland to Amherst, we have three or four new people a day come in,” Whitehouse added.
There are now more than 20 members involved with Worlds Apart Games, most of them volunteers. Even more community members are regulars at the store, or as Whitehouse puts it, “invested” in the establishment.
The approach of the business is strikingly different from that of an average store. Rather than the typical process of walking in, buying what you need and walking out, the staff tries to make customers feel they are a part of the community created by the store. Patrons are encouraged to stay as long as they want.
“One thing we try to do when people come in is not just try to sell them something, but also try to invite them to play a game, or tell them about the events we do,” said Whitehouse.
Whitehouse also emphasized that Worlds Apart is not geared toward people who strongly consider themselves “gamers.”
“We’ve had some people that just like the community and atmosphere and don’t game at all,” he said. He went on to talk about one particular visitor who simply came in to do her homework and chat with the other regulars.
The types of games carried at the store go beyond the norm of typical board games, from varying themes on classic board games to German Eurogames, which experienced gamers find more interesting and exhilarating. There is also a wide variety of lesser known card games and RPGs. All of these games are available for play at any time the store is open.
In the past, Phoenix Games has helped put on many events for the Pioneer Valley Gamer Collective, such as Renaissance fairs and movie screenings. Whitehouse hopes at some point to continue putting on such events in the area. In October, Worlds Apart plans to host the “Incredibly Amazing Overhyped Event,” a gaming party open to the public.
The cooperative also hosts weekly events, including a board game night on Sundays from 5 to 10 p.m, Eurogames night on Mondays from 6 to 10 p.m., and a Magic Booster Draft on Thursday nights.


Anyone interested in becoming a part of this community is encouraged by the staff to come to Worlds Apart’s first general membership meeting of the semester. The meeting will be held at 6 p.m today at the store, located in the basement of 48 North Pleasant Street.