After listening to your feedback, Aurelio Voltaire has been asked not to perform at Wicked Faire: Reborn. We are paying his contract fee, regardless, and we wish him light and luck in future performances. 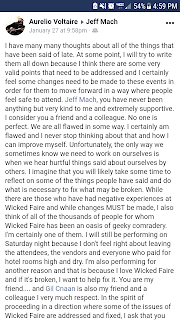 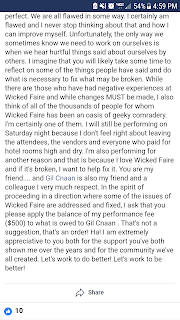 My next show is this Saturday night  at Wicked Faire: Reborn in Princeton, NJ.
The last week has been nothing but a truly upsetting rollercoaster ride of emotions regarding this show. I have honestly gone through every single negative emotion you can imagine, including more anxiety than I realized I was still capable of feeling as an adult. This last weekend, when I was supposed to be enjoying a little time off in Los Angeles, I was instead, reading through all of the allegations against the convention's founder. I then spent literally eight hours writing a post, expressing all of my feelings about what I'd read.

Because I wanted to make sure people understood where I was coming from, I spent a great deal of that time detailing the sexual abuse I suffered as a child. Many people don't know this (I know some of you do) but I was sexually abused by a man (I'm using softer language that I should so as not to offend) from the time I was an infant, well into my teenage years. Ultimately, I felt I went into too much horrifying detail and was over sharing and I deleted the whole thing. The point though, was that I grew up with a very strong distrust, fear and revulsion toward men. It's taken me the better part of 51 years to be able to trust men and forge friendships with them. The great majority of my platonic friends to this day are women. And it is for the reason that I typically believe women when they make allegations against men.

Unfortunately, I've also been the subject of false accusations. In 2000, I was accused (on the internet) of an incredibly disgusting crime I simply did not commit. There seemed to be nothing I could do to defend myself against the allegation. The accuser claimed he had "proof positive" I had done it but refused to share it, and since it had never happened, I did not have any proof with which to defend myself. It took me MONTHS to discover the source of the accusation and over a year to finally find the proof to vindicate myself. I wondered, would my reputation, my life, my career survive that if it had happened in today's climate? The answer is sadly, no. And it is for THAT reason that I try not to rush to judgment despite my inclination to believe that men have behaved terribly.

Ultimately, this means that I take things very very slowly in forming opinions about these situations and I apologize if that was too slow for some of you.

The convention is now in other hands and while time will tell if the problems of the past are fixed, I do strongly feel that there is a very ernest desire amongst those in charge to move forward with the event in a way that creates an environment that people feel safe in. The fact is, the whole community will be watching and I do feel people will be extra vigilant. I also wish to be a part of that movement.

After much going back and forth, I've decided to attend the event and go on with my show as planned for the following reasons:

1) I'm contractually obligated to do so.

2) This is my livelihood and how I pay my bills and feed my family to it behooves me to do my job to the best of my ability and earn a living doing it.

3) I've received lots of email from people who bought tickets and booked hotel rooms to be there for my show and I do not want to leave them high and dry. I also feel the vendors and other guests deserve for there to be entertainment at the convention.

4) I feel the new people in charge deserve a chance to prove they can do a good job. I have to state for the record that Jeff Mach and his staff treated me with nothing but the utmost professionalism through all of the years i've worked with them. I was always paid what I was promised and received what I was told I'd receive. But I also understand that one person's or even a hundred peoples' positive experiences does not mean that others may not have felt abused, unheard or unsafe. I want you all to know that I read your posts, I've heard you and I believe you. Changes clearly needed to be made and I'm willing to trust that lessons were learned and that those changes will be taken VERY SERIOUSLY.

But one can not expect others to fix their community. Wicked Faire has been for me, as I'm sure for many others, an oasis of geeky comradry. But if people felt unsafe, that is something that needs to be taken very seriously. I know from things I've heard and read that my outlandish humor on and off stage has been a source of strife for some. I've used humor as a tool to help myself heal from the things I've experienced which is why it's often scandalous, outrageous and of a sexual nature. I also know that the crazy shit I've said and done on and off stage in the past is not for everyone.  So I too intend to make changes to how I comport myself at con.

When I heard there were people unsure about my presence at Derpycon, I asked their staff to provide me with a female staff member to accompany me and to sit with me at my booth while I meet and greet people. I have asked the staff at Wicked Faire to provide me with the same and they have agreed. While I know my heart and know I would never intentionally do anything to hurt or harm anyone, I will not ask you to blindly accept that. Know that any time you see me at Con I will be in the company of a female staff member who will be there to observe and be someone you can talk to if you ever feel uncomfortable about anything I do or say.

Also, as of about two years ago, I no longer hug people at shows. I went to hug a fan a couple of years ago who apparently did not like being touched by strangers and since then, I always ask. If you've taken a photo with me in the last two years, I'm sure you've heard me ask, "May I place my hand on your shoulder for the photo." Please be aware that this policy is not changing any time soon and that you will absolutely not have any physical contact with me unless you expressly ask for it.

I look forward to a great Wicked Faire. I hope that together we can make it a safe, fun time for EVERYONE.