I was recently contacted by someone who was considering vending at the Oddities Market at Blackthorne. Since they were on one of the email threads, they got a chain email called "Good luck getting Jeff to Pay you"

This email brought up the vendor gift certificates (formerly known as "Jeff Bucks") and:

"In this email it details how he's telling vendors there's no money left to pay them, trying to get them to roll over their credit to next year, threatening to ban them from every even in the north east, etc."

According to JM, he paid out $13,000 in vendor gift certificates.

Per the email snippets I was sent, it sounds like some people were paid and others were not.

Can vendors please confirm this information? Were you paid?

you helped spread the message that we were short on cash and wanted people to roll over their gift certs into next year.

which is exactly the message I wanted you to spread.

but I love catching you people and dissecting you. The wounded innocence. The pretended noninvolvement. The coincidental nonanswers. The way you say one thing to me, then I have screenshots of you saying other things to other people.

Anon via email (re: staff concerns at THE)

I received this via email:

Overall I have good memories of my time at Turtle Hill.  There were a few concerns I had over my time there however, and a few more came up later on.  These mostly revolve around Asha Storm and Fred Friedel, who to my knowledge run much of the hands on part of THE events.

First of all, the events are overwhelmingly white.  As far as I know, everyone in leadership and most of the volunteers were white.  I saw two volunteers get in trouble with leadership during my time there: one was a white man who opened a bottle of beer in front of several department heads while on duty, and the other was the only black person volunteering during a shift shared with white people (I don’t know how legitimate it was that the black volunteer got in trouble in the first place, but I do know they didn’t do anything different than their white colleague).

Secondly, comments were repeatedly made to me or in front of me that implied THE leadership cared more about potential liability than people’s well-being. I think these were all said by Asha, so I don’t know if her views were shared.  She would say things like “we can’t ban him because since he’s disabled, he could sue” Or say that she couldn’t ban someone she believed was violating consent because they could protest the measure.  She also told me about people who were banned for not paying or for harassing staff, so it seemed liability wasn’t a concern all the time.

Asha also made a lot of comments about not believing survivors.  She told me multiple stories of someone reporting an assault to her, in both her capacity as a THE worker and in her personal life, and in each one of these stories, the victim was really at fault.  While false accusations do happen, unless they are all happening around Asha, this seems statistically unlikely.

I didn’t interact with Fred too much at events, so this is more about his character overall than something that happened at THE.

Fred told me he’d been falsely accused of rape several decades ago.  He told me the mother of his son accused him, but that she had enjoyed the encounter at the time.  He also told me she was under 16, and he was over 18, when they met (I believe this was in the 1980s).  She was black, and she died, and he got custody of their son.  He complains his son is racist, and supports or possibly joined the KKK.

Obviously what Fred admits to is statutory rape today, but this was in Germany in the 80s so I don’t know what the law was, but law doens’t equal morality.  While this happened a long time ago, Fred also recounts parts of this story with a degree of cavalierness that’s chilling.

In short, Fred admitted to sleeping with an underage teenager, was later accused of rape by her, and then raised her biracial son, who is now a self-proclaimed racist.

Fred likes to use his son as a reason he is not racist.  Yes, the son who is himself racist, and whose mother was a black woman Fred victimized, is Fred’s “get out of racism free” card.

A reminder to everyone to steer clear of JM and his events. This is the type of email he sends out. This email was sent out to former vendors: 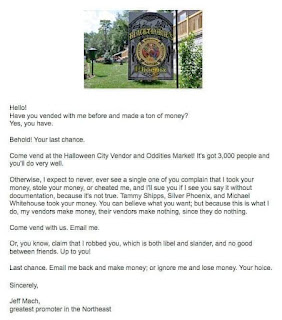 Have you vended with me before and made a ton of money?

Come vend at the Halloween City Vendor and Oddities Market! It's got 3,000 people and you'll do very well.

Otherwise, I expect to never, ever see a single one of you complain that I took your money, stole your money, or cheated me, and I'll sue you if I see you say it without documentation, because it's not true. Tammy Shipps, Silver Phoenix, and Michael Whitehouse took your money. You can believe what you want; but because this is what I do, my vendors make money, their vendors make nothing, since they do nothing.

Come vend with us. Email me.

Or, you know, claim that I robbed you, which is both libel and slander, and no good between friends. Up to you!

Last chance. Email me back and make money, or ignore me and lose money. Your hoice [sp].

greatest promoter in the Northeast"

Also, a reminder about gaslighting (i.e., "when someone intentionally twists your perception of reality for their own gain"). I'm not saying that JM is gaslighting anyone, but please consider for yourself: 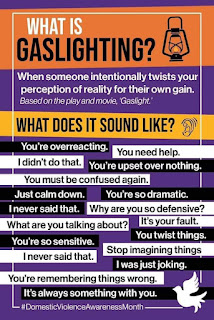 New (to this blog) name: Sean Meehan. Please see below links for information:

May be otherwise known as "The Pervy Sage." Cosplays as Guy Fieri. He was connected to Pleasant Nightmare Entertainment before being removed due to " unwarranted sexual advances."

Please stay safe out there, everyone.

"In 2012, the term ‘missing stairs’(2) was coined to describe such people by Cliff Pervocracy for his blog The Pervocracy, in a post discussing dangerous people in kink.

‘The missing stair’ is his metaphor for a dangerous person known to a community, which chooses to quietly warn individuals of the danger instead of deeming the problem unacceptable and fixing it."

Email ThisBlogThis!Share to TwitterShare to FacebookShare to Pinterest
Older Posts Home
Subscribe to: Posts (Atom)
This blog exists as a resource, a reference point to serve as a caution notice.
Believe it, don't believe it... but remember this when the next person gets swindled or assaulted.
Also, a reminder.