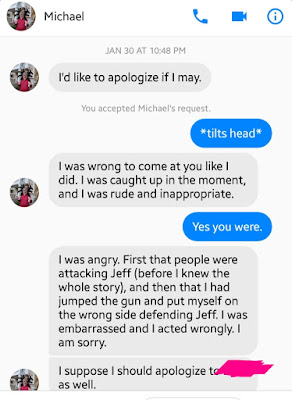 MW: I was wrong to come at you like I did. I was caught up in the moment, and I was rude and inappropriate.

me: Yes you were.

MW: I was angry. First that people were attacking Jeff (before I knew the whole story), and then that I had jumped the gun and put myself on the wrong side defending Jeff. I was embarrassed and I acted wrongly. I am sorry.
I suppose I should apologize to ****** as well. 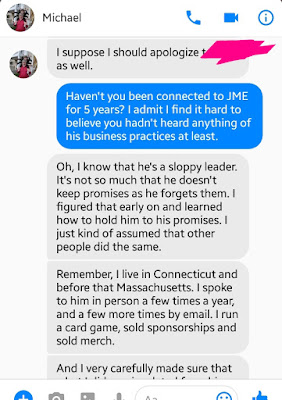 me: Haven't you been connected to JME for 5 years? I admit I find it hard to believe you hadn't heard anything of his business practices at least.

MW: Oh, I know that he's a sloppy leader. It's not so much that he doesn't keep promises as he forgets them. I figured that early on and learned how to hold him to his promises. I just kind of assumed that other people did the same.

Remember, I live in Connecticut and before that Massachusetts. I spoke to him in person a few times a year, and a few more time by email. I run a card game, sold sponsorships, and sold merch.

And I very carefully made sure that what I did was insulated from his foibles, so I never really saw them. I didn't get paid except as a commission of what I sold, and I didn't realize other people got paid at all until relatively recently. 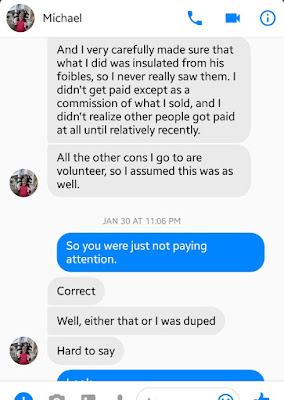 All the other cons I go to are volunteer, so I assumed this was as well.

me: So you were just not paying attention.

MW: Correct.
Well, either that or I was duped.
Hard to say. 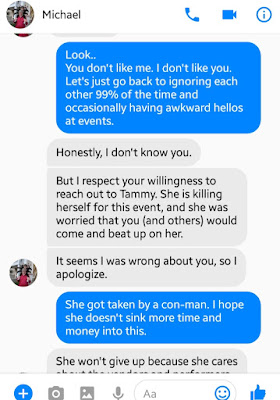 me: Look...
You don't like me. I don't like you.
Let's just go back to ignoring each other 99% of the time and occasionally having awkward hellos at events.

MW: Honestly, I don't know you.

But I respect your willingness to reach out to Tammy. She is killing herself for this event, an she was worried that you (and others) would come and beat up on her.

It seems I was wrong about you, so I apologize.

me: She got taken by a con-man. I hope she doesn't sink more time and money into this. 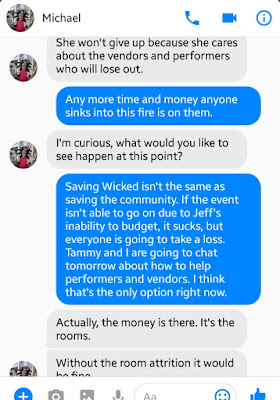 MW: She won't give up because she cares about the vendors and performers who will lose out.

me: Any more time and money anyone sinks into this fire is on them.

MW: I'm curious, what would you like to see happen at this point?

me: Saving Wicked isn't the same as saving the community. If the event isn't able to go on due to Jeff's inability to budget, it sucks, but everyone is going to take a loss. Tammy and I are going to chat tomorrow about how to help performers and vendors. I think that's the only option right now.
(side note: conversation did not occur. I reached out to Tammy; no response.)

MW: Actually, the money is there. It's the rooms.
Without the room attrition it would be fine.

me: Beating a dead horse. 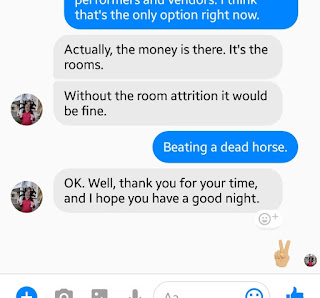 MW: OK. Well, thank you for your time, and I hope you have a good night.