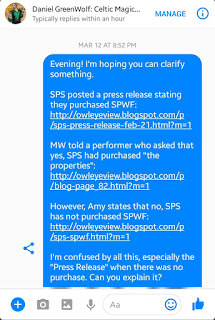 Owl (March 12):
Evening! I'm hoping you can clarify something.

MW told a performer who asked that yes, SPS had purchased "the properties":
http://owleyeview.blogspot.com/p/blog-page_82.html?m=1

However, Amy states that no, SPS has not purchased SPWF:
http://owleyeview.blogspot.com/p/sps-spwf.html?m=1

I'm confused by all this, especially the "Press Release" when there was no purchase. Can you explain it? 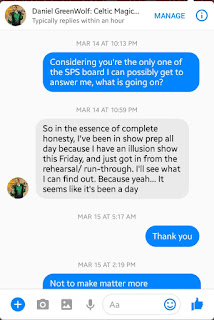 Owl (March 14):
Considering you're the only one of the SPS board I can possibly get to answer me, what is going on?

D.G.:
So in the essence of complete honesty, I've been in show prep all day because I have an illusion show this Friday, and just got in from the rehearsal/ run-through. I'll see what I can find out. Because yeah... It seems like it's been a day 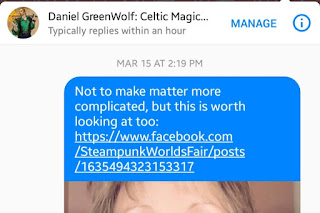 Owl: Not to make matter more complicated, but this is worth looking at too:
https://www.facebook.com/SteampunkWorldsFair/posts/1635494323153317 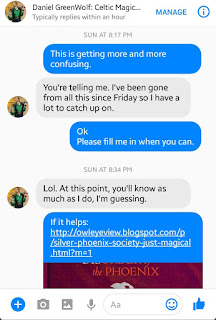 Owl (March 18): This is getting more and more confusing.

D.G.:
You're telling me. I've been gone from all this since Friday so I have a lot to catch up on.

Owl: Ok
Please fill me in when you can.

Owl: If it helps: http://owleyeview.blogspot.com/p/silver-phoenix-society-just-magical.html?m=1 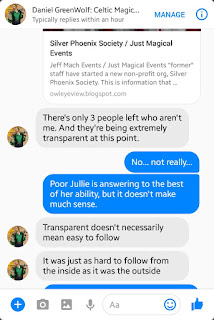 D.G.: There's only 3 people left who aren't me. And they're being extremely transparent at this point.

Owl: No... not really...
Poor Jullie is answering to the best of her ability, but it doesn't make much sense.

D.G.: Transparent doesn't necessarily mean easy to follow
It was just as hard to follow from the inside as it was the outside 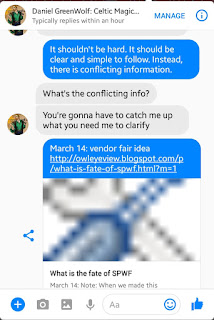 Owl: It shouldn't be hard. It should be clear and simple to follow. Instead, there is conflicting information.

D.G.: What's the conflicting info?
You're gonna have to catch me up what you need me to clarify 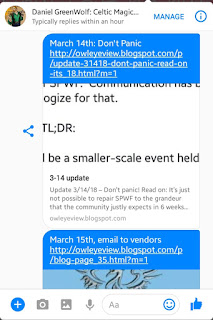 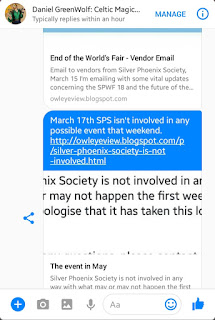 Let's start with that. What is happening in May? 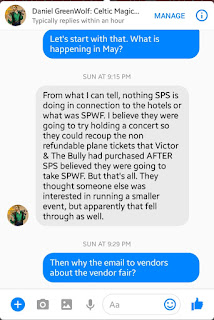 D.G.: From what I can tell, nothing SPS is doing in connection to the hotels or what was SPWF. I believe they were going to try holding a concert so they could recoup the non refundable plane tickets that Victor & The Bully had purchased AFTER SPS believed they were going to take SPWF. But that's all. They thought someone else was interested in running a smaller event, but apparently that fell through as well.

Owl:
Then why the email to vendors about the vendor fair? 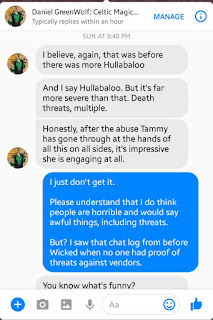 D.G.: I believe, again, that was before there was more Hullabaloo
And I say Hullabaloo. But it's far more severe than that. Death threats, multiple.
Honestly, after the abuse Tammy has gone through at the hands of all this on all sides, it's impressive she is engaging at all.

Please understand that I do think people are horrible and would say awful things, including threats.

But? I saw that chat log from before Wicked when no one had proof of threats against vendors. 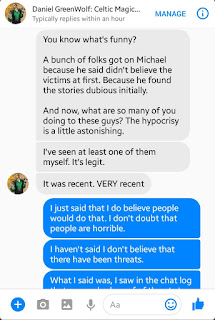 A bunch of folks got on Michael because he said didn't believe the victims at first. Because he found the stories dubious initially.

And now, what are so many of you doing to these guys? The hypocrisy is a little astonishing.

I've seen at least one of them myself. It's legit.

It was recent. VERY recent

Owl: I just said that I do believe people would do that. I don't doubt that people are horrible.
I haven't said I don't believe that there have been threats.
What I said was, I saw in the chat log that no one had proof of threats to vendors. 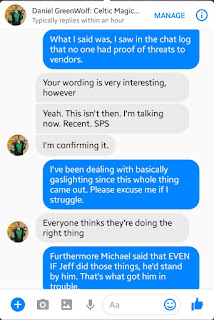 D.G.: Your wording is very interesting, however
Yeah. This isn't then. I'm talking now. Recent. SPS
I'm confirming it.

Owl: I've been dealing with basically gaslighting since this whole thing came out. Please excuse me if I struggle.

D.G.: Everyone thinks they're doing the right thing 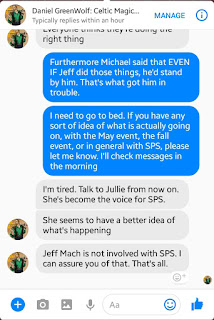 Owl:
Furthermore Michael said that EVEN IF Jeff did those things, he'd stand by him. That's what got him in trouble.
I need to go to bed. If you have any sort of idea of what is actually going on, with the May event, the fall event, or in general with SPS, please let me know. I'll check messages in the morning

D.G.: I'm tired. Talk to Jullie from now on. She's become the voice for SPS.
She seems to have a better idea of what's happening
Jeff Mach is not involved with SPS. I can assure you of that. That's all.