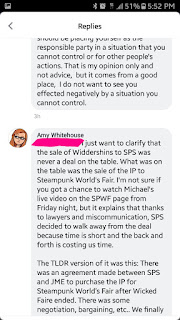 Amy:
I just want to clarify that the sale of Widdershins to SPS was never a deal on the table. What was on the table was  the sale of the IP to Steampunk World's Fair. I'm not sure if you got a chance to watch Michael's live video on the SPWF page from Friday night, but it explains that thanks to lawyers and miscommunication, SPS decided to walk away from the deal because time is short and the back and forth is costing us time.
The TLDR version of it was this: There was an agreement made between SPS and JME to purchase the IP for Steampunk World's Fair after Wicked Faire ended. 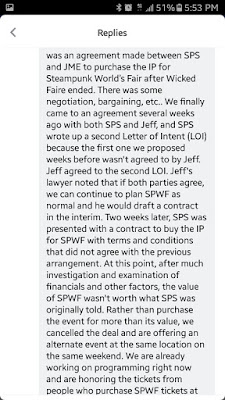 There was some negotiation, bargaining, etc. We finally came to an agreement several weeks ago with both SPS and Jeff, and SPS wrote up a second Letter of Intent (LOI) because the first one we proposed weeks before wasn't agreed to by Jeff. Jeff agreed to the second LOI. Jeff's lawyer noted that if both parties agree, we can continue to plan SPWF as normal and he would draft a contract in the interim. Two weeks later, SPS was presented with a contract to buy the IP for SPWF with terms and conditions that did not agree with the previous arrangement. At this point, after much investigation and examination of financials and other factors, the value of SPWF wasn't worth what SPS was originally told.  Rather than purchase the event for more than its value, we cancelled the deal and are offering an alternate event at the same location on the same weekend. 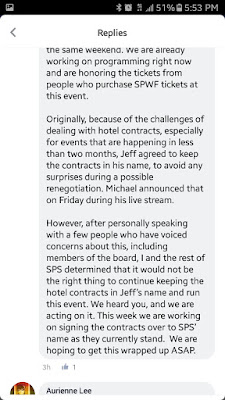 We are already working on programming right now and are honoring the tickets from people who purchase SPWF tickets at the event.

Originally, because of the challenges of dealing with hotel contracts, especially for events that are happening in less than two months, Jeff agreed to keep the contracts in his name, to avoid any surprises during a possible renegotiation. Michael announced that on Friday during his live stream.

However, after personally speaking with a few people who have voiced concerns about this, including members of the board, I and the rest of SPS determined that it would not be the right thing to continue keeping the contracts in Jeff's name and run this event. We heard you, and we are acting on it. This week we are working on signing contracts over to SPS' name as they currently stand. We are hoping to get this wrapped up ASAP.