Public posts and comments, Facebook, March 6th. The last set of comments is quite concerning, in my opinion. 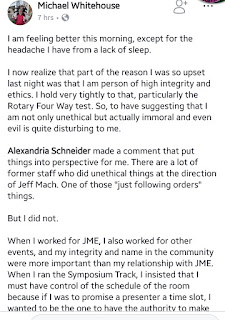 I am feeling better this morning, except for the headache I have from a lack of sleep.

I now realize that part of the reason I was so upset last night was that I am person of high integrity and ethics. I hold very tightly to that, particularly the Rotary Four Way test. So, to have suggesting that I am not only unethical but actually immoral and even evil is quite disturbing to me.

Alexandria Schneider made a comment that put things into perspective for me. There are a lot of former staff who did unethical things at the direction of Jeff Mach. One of those "just following orders" things.

But I did not.

When I worked for JME, I also worked for other events, and my integrity and name in the community were more important than my relationship with JME. When I ran the Symposium Track, I insisted that I must have control of the schedule of the room because if I was to promise a presenter a time slot, I wanted to be the one to have the authority to make sure they got it. I was so worried that I might promise someone 2:00 and they'd be upset to find out they were pushed to 5:00 that I wouldn't put my name on it if I couldn't be sure.

Alexandria and many other staff may have been just following orders, but when I received such orders, I simply refused to do it.

I had little influence in the organization to change that part of things, but I was not going to have any part of it.

I don't fault the people who did unethical things for Jeff Mach when directed to. It's a tough spot to be put in. But Jeff Mach was not a dictator with the power over life and death. He didn't even run the only con in town. If a conchair or a company head asks me to do something you think is wrong, I would never go along with it. Even in business, if my boss would ask me to do something unethical, I would not do it, and I used to sell cars and life insurance while still holding to this code of ethics. I refused to ever lie to a customer when I was a car salesman. Part of the reason I work for Best Version Media is that they are the most ethical company I've ever encountered.

So, when people ask what the difference is between the new organization and the old, the difference is this: Silver Phoenix Society is run by the people who, when asked to do something unethical refused to do so. We either did what was right or avoided working with the element of the company which was out of line.

This is why I love working with Andy Lange. His ethical code is rock solid, and his insistence that we must be completely clear with anyone we book about all elements of the process to the greatest extent possible gives me great confidence that our relationships with performers will be to the absolute highest ethical standards.

It's possible that I may discover that there are people on my staff who did unethical things under orders. If that is the case, then there will have to be a discussion. As I said, I don't necessarily blame those who did wrong under orders, but it depends on the level of the wrong we are talking about and whether that lack of ethics is internal to the individual in question or a simply lack of will or good sense.

As for SPS and Steampunk Worlds Fair, I still maintain the same high standard of integrity. I have no intention of ever promising something I do not believe I can deliver. I will never ask someone to do something that is questionable with their own ethics or mine. We are going to run a great convention, but more importantly, we are going to run a good convention, because if you have to cheat people to make it happen then it's just not worth it.

As I think about it, It occurs to me that perhaps more than a code of conduct, we should create a Code of Ethics.

My sincere thanks to Alexandria Schneider for inspiring this line of thinking. 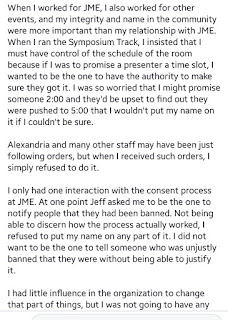 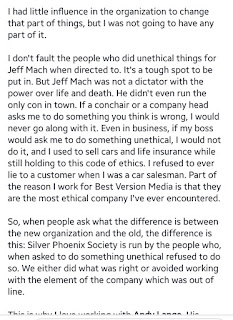 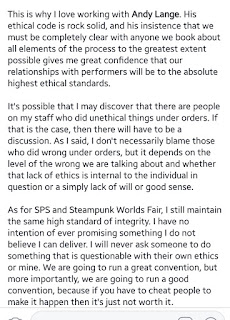 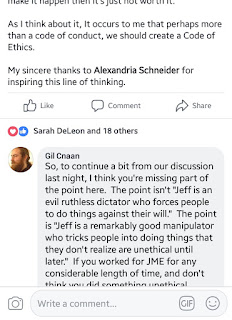 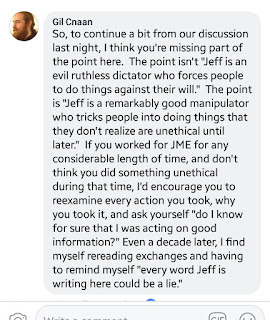 So, to continue a bit from our discussion last night, I think you're missing part of the point here.  The point isn't "Jeff is an evil ruthless dictator who forces people to do things against their will."  The point is "Jeff is a remarkably good manipulator who tricks people into doing things that they don't realize are unethical until later."  If you worked for JME for any considerable length of time, and don't think you did something unethical during that time, I'd encourage you to reexamine every action you took, why you took it, and ask yourself "do I know for sure that I was acting on good information?" Even a decade later, I find myself rereading exchanges and having to remind myself "every word Jeff is writing here could be a lie." 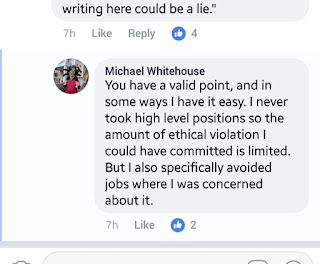 You have a valid point, and in some ways I have it easy. I never took high level positions so the amount of ethical violation I could have committed is limited. But I also specifically avoided jobs where I was concerned about it. 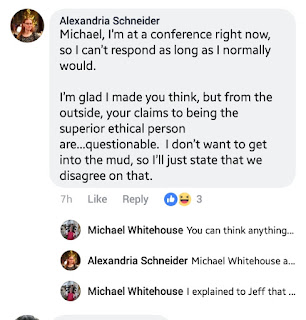 Michael, I’m at a conference right now, so I can’t respond as long as I normally would.

I’m glad I made you think, but from the outside, your claims to being the superior ethical person are...questionable.  I don’t want to get into the mud, so I’ll just state that we disagree on that. 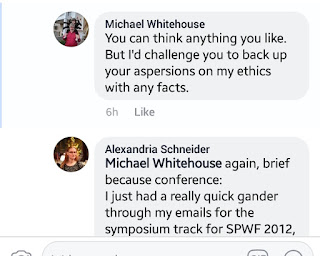 You can think anything you like. But I'd challenge you to back up your aspersions on my ethics with any facts.

Michael Whitehouse again, brief because conference:
I just had a really quick gander through my emails for the symposium track for SPWF 2012, which you organized.  My records show that you heavily resisted interfacing with the performance department (Matt DeBlass and myself) when it came to scheduling and booking the symposium track.  At no point was your stated reasoning ‘I want to be able to make sure I’m treating my people right’. A phrase that was mentioned often was simple ‘I was told I was in charge’, or some variation. 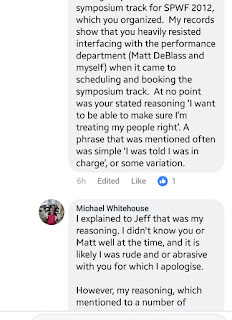 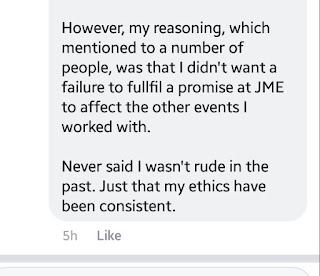 I explained to Jeff that was my reasoning. I didn't know you or Matt well at the time, and it is likely I was rude and or abrasive with you for which I apologise.

However, my reasoning, which mentioned to a number of people, was that I didn't want a failure to fullfil a promise at JME to affect the other events I worked with.

Never said I wasn't rude in the past. Just that my ethics have been consistent. 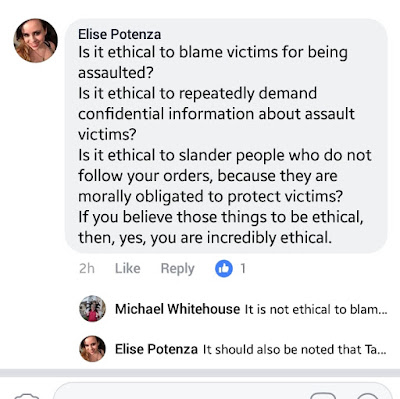 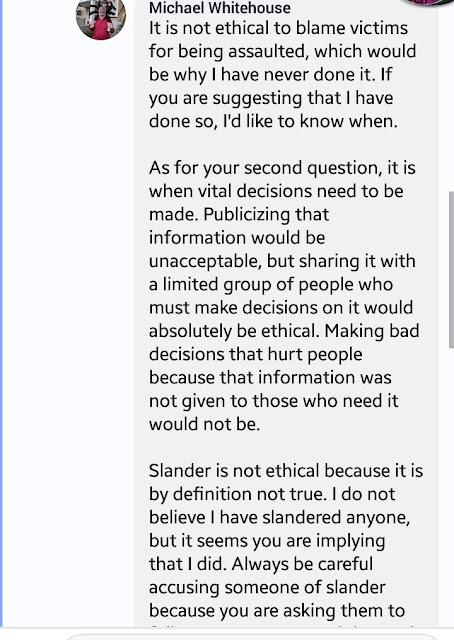 It is not ethical to blame victims for being assaulted, which would be why I have never done it. If you are suggesting that I have done so, I'd like to know when.

As for your second question, it is when vital decisions need to be made. Publicizing that information would be unacceptable, but sharing it with a limited group of people who must make decisions on it would absolutely be ethical. Making bad decisions that hurt people because that information was not given to those who need it would not be.

Slander is not ethical because it is by definition not true. I do not believe I have slandered anyone, but it seems you are implying that I did. Always be careful accusing someone of slander because you are asking them to fully prove your wrongdoing and the truthfulness of their allegations, which I have been reticent about. However, if you would like me to go into great detail on a public forum about your errors and omissions, I would be willing to oblige. 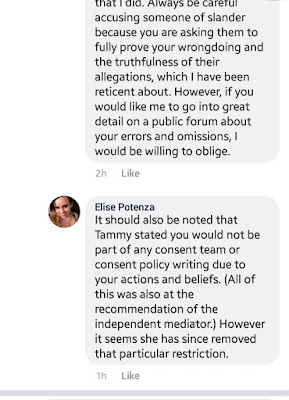 It should also be noted that Tammy stated you would not be part of any consent team or consent policy writing due to your actions and beliefs. (All of this was also at the recommendation of the independent mediator.) However it seems she has since removed that particular restriction.
Posted by Brenna Kali Skirata at 3/06/2018 06:20:00 PM

Newer Post Older Post Home
Subscribe to: Post Comments (Atom)
This blog exists as a resource, a reference point to serve as a caution notice.
Believe it, don't believe it... but remember this when the next person gets swindled or assaulted.
Also, a reminder.