My stories tend to be a milder than some others, as I tended to stick only with people I knew. Many of my issues had to do with being a volunteer then vendor.

As a volunteer at Wicked !!, when it was still at the convention center, we were promised free entry and food, as well as a locked “staff only” space, which at the time I was ok with. Come the day of, there was no food available at the event AT ALL as the food vendor never got the permits needed (or didn’t know they needed specific permits. Oddly, they were already in the food prep location and had put signage up before being told they couldn’t work.) By the end of the day I was fading and the only reason I didn’t pass out was because one of my vendor friends saw me looking very pale and fed me pizza he had left over from feeding his crew. Additionally, once Voltaire showed up, we were kicked out of the “green room”, aka, the “staff only” space, for a few hours. You know, the space with all of our personal stuff in it. So that was lovely.

Fast forward to Wicked’s first year at the Doubletree (I believe it was 2009 (Wicked year 4), the chocolate factory theme). At this point I was vending with friends. A supposed perk of our location was that it was a room that would be locked at night, keeping our wares safe once vending hours were over, allowing us to enjoy the evening’s parties and relax after a long day. Partway through one of the days it was asked if WE (the vendors as a whole, hence to collective “we”) would mind if a Rocky Horror shadowcast could perform in the space after vending hours were over. There was a resounding “no”, as that would mean the room would be left open and unlocked past vending hours. Having the room open meant that all of us vendors in the room who did not feel safe leaving our items left out (i.e. – everyone who couldn’t pack their shit up and bring it up to their hotel room) had to stay in the room HOURS after we were supposed to be able to leave.
Word came down from on high about an hour before vending hours were supposed to end that the Rocky Horror shadowcast would be happening in our vending room. Complaints to Jeff about this security issue fell on deaf ears. As he said it “That is the only space we have available for it”. This completely went against the vendor agreement which stated that vending rooms which could be locked would be locked at the end of vending hours. When the shadowcast people came in, they tried to move vendor items and tables out of the way to create a larger performance and audience space. Meaning ALL vendors had to stay to ensure their displays wouldn’t be moved. Any and all complaints never amounted to anything. Us vendors never received even an apology for a situation we never should have been put in in the first place, as per our signed vendor agreements.

These last ones do not have to do with Jeff himself, but with his laughably named “security” staff. If someone is going to run a large event with many moving parts he should hire people who wouldn’t take advantage of their position.
At the Doubletree, a friend of mine was approached by someone on security staff while waiting for the elevator. He mentioned that the elevator was backed up and would take a while due to the amount of people using it. Luckily he knew a ~secret~ staircase, the “security only” staircase, because he was security, and he could show it to her. He expounded on and on about how ~lucky~ she was he found her and that she was ~allowed~ to use this (publicly accessible but admittedly out of the way) staircase. He made numerous remarks about her being so lucky, and thinly veiled hints about if they wanted to fool around there no one would catch them (“unless you’re into that”), due to how remote and unused the staircase was. She got up the staircase and back into more populated space, then avoided that area for the rest of con, fearing the worst. Because nothing physical happened, she did not report it. But really, who could she report it to? Security? Yeah, right.

An issue personally occurred to me at one of the last Wicked Faires at the Doubletree (the years blend together after a while). I had gotten to know quite many people who visited both WF and many other related events in the NJ/Philly area. One of these was a man named Chris (known as Draven Kane in the scene world). At this point he was a part of the Wicked Faire security team. We were acquaintances but nothing more, seeing each other at events and talking about fairly superficial stuff. He knew I was monogamous and in a relationship, and did not “play” with anyone else nor did I appreciate physical advances from other people without spoken mutual consent. Regardless he persisted to put down my “monotonous” relationship. At one point I was taking a rare short break from being at my vending table. I was sitting on a stone planter wall on the ground floor under the staircase (a heavily traveled and populated area) talking with a friend. I notice at the last minute Chris making a beeline towards me. He scoops me off the wall, plops me over his shoulder, and starts spanking my ass COMPLETELY without my consent. I told him, loudly, to put me down. He just laughed and continued to spank my ass. I then yelled “I DID NOT CONSENT TO THIS”. The ensuing silence from the rest of the crowd around us was palpable. He slowly let me down to my feet. I was LIVID! And I told him so, loudly and in no uncertain terms. Still livid, I went outside to have a cigarette and calm my nerves. At this point I headed back to to my table. I did report his behavior to Spawn, who I believed was the head of security at that time, hoping something would happen. Nothing did. Of course it didn’t.


It was then that we decided that was the last Wicked Faire we’d ever go to. Crowds were dwindling, patrons weren’t shopping as much as they were before, and the sense of safety that had been built in previous years was gone. Since then I tell everyone I know and meet to stay away from his events or, if they really do want to go, to be hyperaware and vigilant. What was once a safe and welcoming space had degraded into an exploitative event full of predators and no support.


With apologies to the author, I am adding three images below. Images are screencaps from a comment on JM's post calling for volunteers, Jan 23rd (If I recall the date properly). The comment below this post prompted the posting. Name has not be covered, since he is named above. 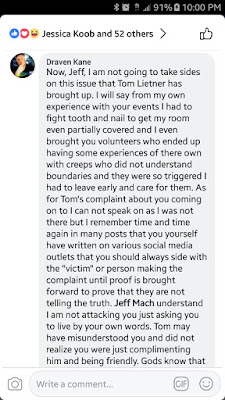 "Tom may have misunderstood you and did not realize you were just complimenting him and being friendly." 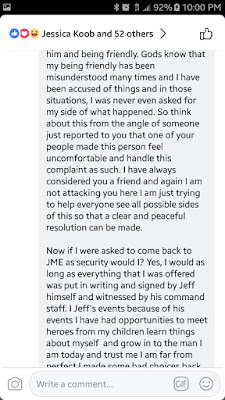 "Gods know that my being friendly has been misunderstood many times and I have been accused of things, and in those situations, I was never asked for my side of what happened. So think about this from the angle of someone just reported to you that one of your people made this person feel uncomfortable and handle this complaint as such. ...
Now if I were asked to come back to JME as security would I? Yes, I would as long as everything that I was offered was put in writing and signed by Jeff himself..." 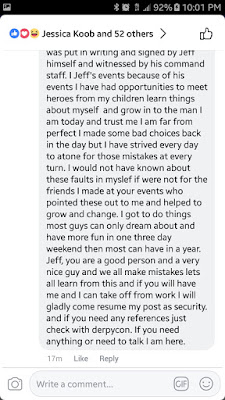 "... if you will have me and I can take off from work I will gladly resume my post as security, and if you need any references just check with derpycon. ..."

Personal note: I'm certain I was at the WF that Anon 8 mentions in regard to the consent violation. In fact, this sparks a memory, and I will confirm the truth of her story as she describes above.

By Draven Kane you mean Gilpatrick Jose Matos aka Draven Kane, an alias he took when he decided to get involved in security at kink events after being fired as a bartender for a racial hate crime intimidating a girl for having a black boyfriend. (link included http://www.nj.com/cumberland/index.ssf/2009/09/millville_police_charge_four_p.html )Then after insinuating himself in with JME and Derpy con used that position to transport underaged girls across state lines to have sex with them, that Draven Kane. One who, oddly enough just like Snake Eyes is being investigated for his Stolen Valor claims of having been a US soldier in order to get security jobs and scam housing from fellow vets? Yeah, He's still working Con security for Derpy and a few others. Yeah Jeff was made aware of ALL of this as far back as GKE 1 at least and he did not think to mention it when he glowingly recommended him for work with my own company. an action which I deeply regret and wish I had not trusted Jeff's word on his background.