The policy, as of April 28th, has been temporarily removed from the site. I am glad I had screencapped it prior to its removal.

It begins: "We are dedicated to providing a harassment-free experience for every person at every one of our events." This alone cements my above worry: that although this is (was) posted to the SPWF page, it is actually the policy in effect at other JM events (sidenote: when did Widdershin Productions drop away?).

That beginning statement is all well and good, but the policy goes drastically downhill from there.

"Harassment is defined as unwelcome conduct that unreasonably interferes with an individual's ability to attend or enjoy the event by creating an intimidating, threatening, unsafe, hostile, or abusive environment." They go on to list what could be construed as harassment, including "touching people non-sexually without their consent." This is the first red flag. I know Wicked Faire. I know how crowded the event becomes; how tightly packed vendors can be; how many people attempt to cram into elevators and the hot tub. Does this mean that if I sit next to someone while watching White Elephant Burlesque or Dan Greenwolf (which are both always packed to capacity and beyond), and my thigh pressed against theirs, that I can be reported to the convention for harassment because I touched someone without their express consent? The logical part of me says "No, of course not! Everyone else understands how crowded it is!" But, as written, the policy implies that that could happen. Perhaps the person would think I was "creepy" or I was touching them in an intimidating manner. With this policy in place, with that wording, it is possible.

The policy goes one to state "being heavily under the influence of drugs and/or alcohol" is considered harassment. While I understand the need to have a rule that basically says "if you drink, and get hurt, the convention is not liable for your actions," this is not the way to state it. I have witnessed Jeff Mach staffers far more drunk than I could ever be and also possibly under the influence of controlled substances. They may be "off duty" at those times, but if "harassment" can be something as simple as being heavily under the influence, then staffers, especially well-known staffers, or staffers still in "staff" shirts, need to stay stone-cold sober.

The list of what can be harassment concludes with "being a jerk." This is where I realise that I am no longer welcome at JM events. I'm crass when I want to be. I refuse to tamp down my mouth for the safe of someone's feelings, which is probably why I'm writing this in the first place.

The policy goes on to give advice on “how to avoid harassing people in the first place.” Once again, we are told that “sobriety is essential.” Please see my comment above about sobriety at JM events and the staffers. I know that, yes, people do lose inhibitions when they are not sober, but I also feel that we are adults and can generally know when we are being inappropriate when not sober. None of us are new to this whole alcohol thing. If someone is not sober and is being a jerk, we can walk away from them. We can shut a door in their face. We can do what people in bars have been doing for years: ignore them or get security. When security is needed, finally, we do fall into the realm of harassment. However, inebriation does not always lead to harassment. I find it rarely does, and I’ve both been the inebriated party and the sober party at events.

This connects to the later statement of “if people are intoxicated or impaired, they cannot give consent.” Yes, true, but, what if both parties are equally intoxicated? This actually is a thing! Not every situation is a drunk girl and a sober guy who is taking advantage. Sometimes, both parties are intoxicated.. Just because either party feels regret the morning after does not mean it was harassment. For example, if a male is drunk, and does whatever with a girl who is drunk as well, and he regrets it in the morning, he could tell the JM event staff that he was “intoxicated or impaired” and therefore his enthusiastic, drunken, consent the night before didn’t count. Suddenly, his partner is accused of harassment, even though she was as intoxicated as well.

The next part of the policy is “what you should do if you are harassed.” Most of this is actually decent advice: “use the staff as a safe space” and “ask the staff to watch the person’s behavior,” are both perfectly logical and acceptable. However, the suggestion of “you can ask us to talk to people on your behalf and facilitate the resolution of any issues” is not appropriate at JM events. No one at JM events, as far as I am aware, are trained in conflict resolution or are therapists. I have seen JM security have conversations that were handled badly. I do not feel that JM event staffers are qualified to “facilitate the resolution of any issues.” Furthermore, the staffers are often overworked volunteers who have other duties that are their responsibility. Unless someone is a trained individual who is dedicated to this sort of conflict resolution, this step can cause more harm than good.

The next section is “how the event will respond if you are harassed.” It states “it doesn’t matter who harassed you, be they new to the event, a stranger or a famous event organizer.” I highly doubt that if someone states “Jeff Mach harassed me,” that the event will take it seriously. I doubt that if anyone of note was accused the event would take it seriously. Once again, I have heard stories about performers harassing customers and nothing has been done in the past. Since these are not my stories, I cannot corroborate them, but I trust my sources. While the policy says “we will not shame you. We will not dismiss you,” I again highly doubt this statement in all cases. If a petite girl claims harassment, I’m sure that it will be taken more seriously than if I do (I am, after all, tall and plus-size), or if a male does. This section also raises a giant red flag in the “we will not reveal your identity to the person or persons who harassed you under any circumstances.” This directly conflicts with an earlier implication of mediation between parties. Unless the event is going to play a large game of “he said, she said,” then mediation between parties is important to resolve issues. Otherwise, no one really knows what happened or who said what.

One statement that sticks in my mind is the “if you have a concern about a person or persons from past experience, be it at one of our events or not, please notify….” This is a resounding problem. I, for example, have an ex-girlfriend who has insisted on stalking me and one of my partners (also her ex). I have already informed JM Events about this issue. I have never involved law enforcement, because the only time she attempts to make contact is at Wicked Faire or on social media. This issue persists at every Wicked Faire I have attended for the past four years. This is part of the reason that I did not attend Wicked Faire 2014. I simply cannot be in the same space as this woman without her trying to find me or my partner. I have told her to stay away personally. I have blocked her on all social media. I have told Wicked Faire staff about this issue. She still attends Wicked Faire and she still attempts to follow me and my partner. Clearly this is an issue that has been ignored and it has lost Wicked Faire a patron and a performer.

The next section of the policy is “what you should do if you’re accused of harassment.” This is the section with the most issues. The statement: “given the rarity of false complaints you should also accept the fact that is is more likely than not that you actually did violate someone else’s boundaries.” is one of the most unreasonable things I have ever seen in print.  The simple fact that this policy is written in such vague terms opens nearly every patron, staffer, and performer of this event to harassment. For example, if I am a vendor and another vendor is doing better business than I am, and I decide to get them removed, all I need to do is find a person willing to file a false complaint and request that the other vendor be removed from the event. My rival will never know who filed a complaint and JM Events will assume that due to the “rarity of false complaints” that this is an actual complaint. It is possible that I could enlist multiple people in my vendetta.This could easily destroy a vendor or performer’s weekend and impact their livelihood.

One of the options of what can be done is “we may give you a lift to the train station.” This is flippant and impractical. After all, if someone is accused, they have still paid the hotel for their room. They may be able to be expelled from the event, but there is no legal recourse in removing them from a hotel that they have paid directly to stay in, unless law enforcement becomes involved.

Another problem I see with this policy is the statement that “we are not going to identify your accuser or accusers to you. DO NOT ASK.” The Sixth Amendment of the Constitution gives those accused the right to face their accuser. While JM Events is a private business and does not need to adhere to this, it is a logical step in the education process. For example, in my hypothetical situation above, with two inebriated patrons,  more good could come from them sitting down and discussing what happened. One or both could apologize for their actions, and learn why this was considered and reported harassment. This is far more logical than removing and/or blacklisting a patron who, in the moment, was doing nothing wrong (after all, she had his consent). Furthermore, if the event does not disclose the accuser, or at least the time and place, then there can be no one brought to corroborate this he said / she said issue. If there are not witnesses spoken to by JM staffers, then how can anyone verify the truth?

The policy addresses a small section “regarding false complaints.” They state that “false complaints make up a very small percentage of overall complaints.” Again, while this may currently be the case, by creating a vague document about what harassment is, I feel that the number of false complaints will rise, simply due to vendettas, nasty breakups, and hungover regret.

As of late in the day on April 29th, the policy has been updated and is far better. It does address some of my above concerns, including false accusations are to be considered an act of harassment. These changes do not change my stance regarding never attending another Jeff Mach event. 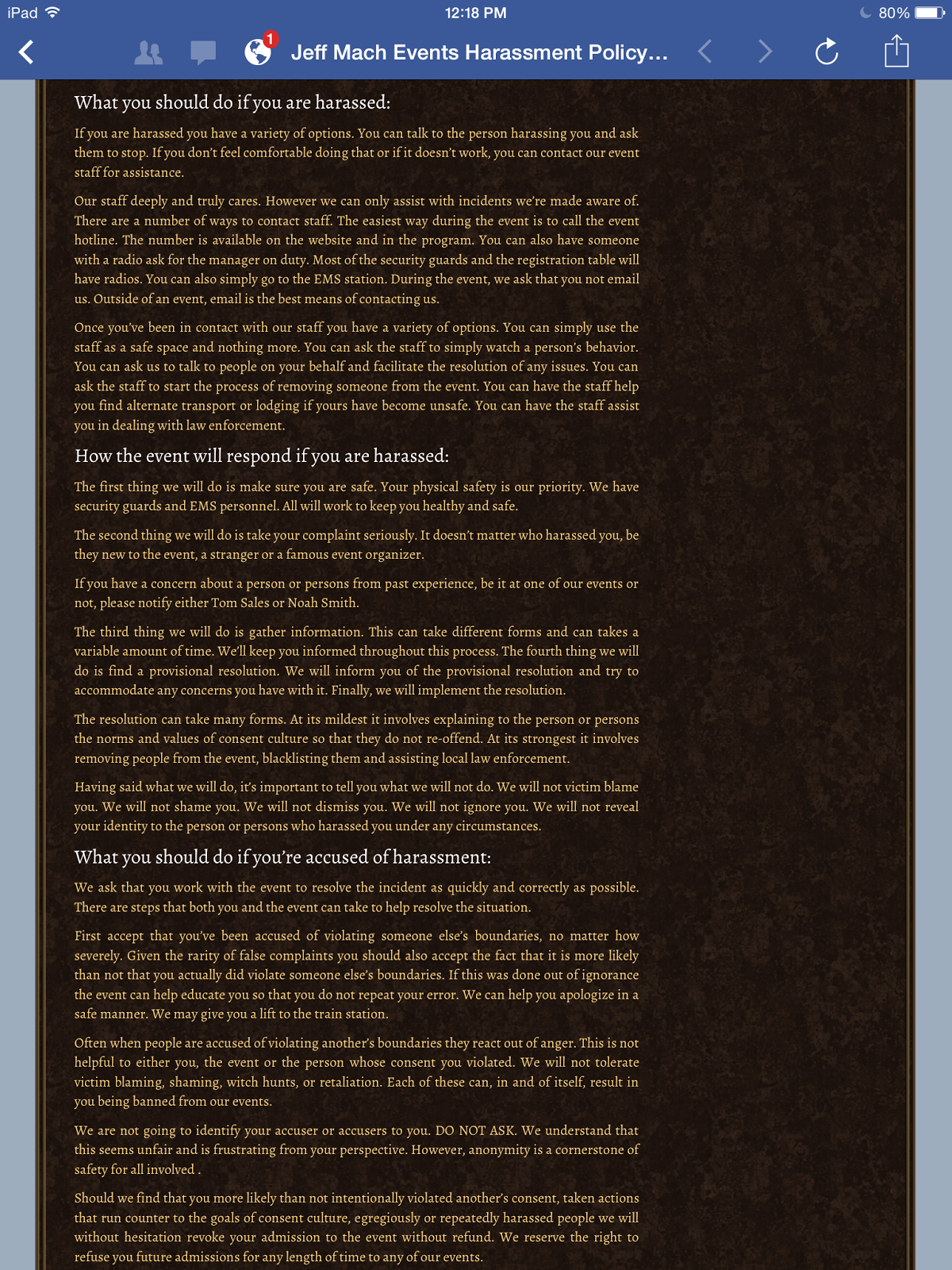 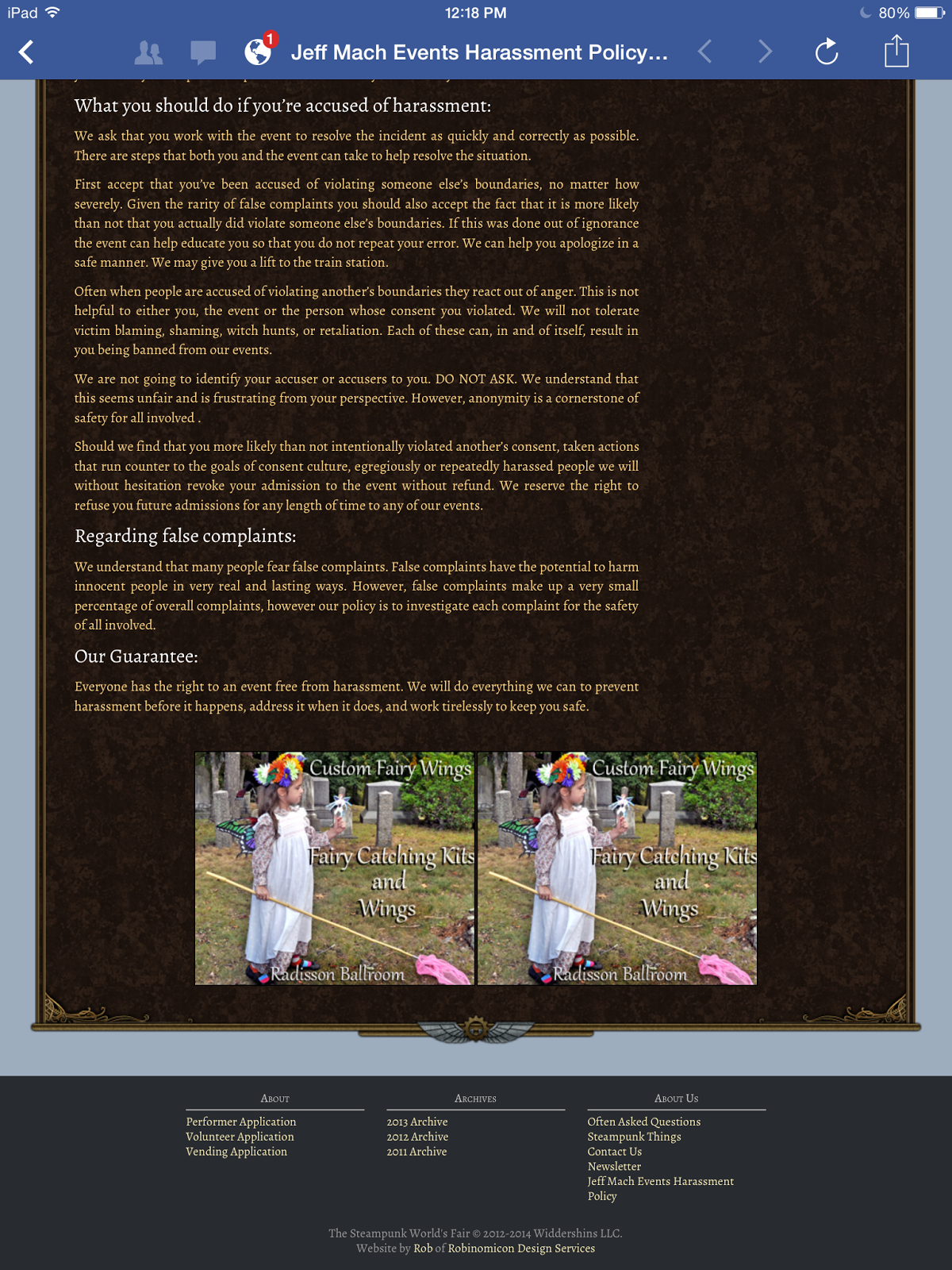 Newer Post Older Post Home
Subscribe to: Post Comments (Atom)
This blog exists as a resource, a reference point to serve as a caution notice.
Believe it, don't believe it... but remember this when the next person gets swindled or assaulted.
Also, a reminder.